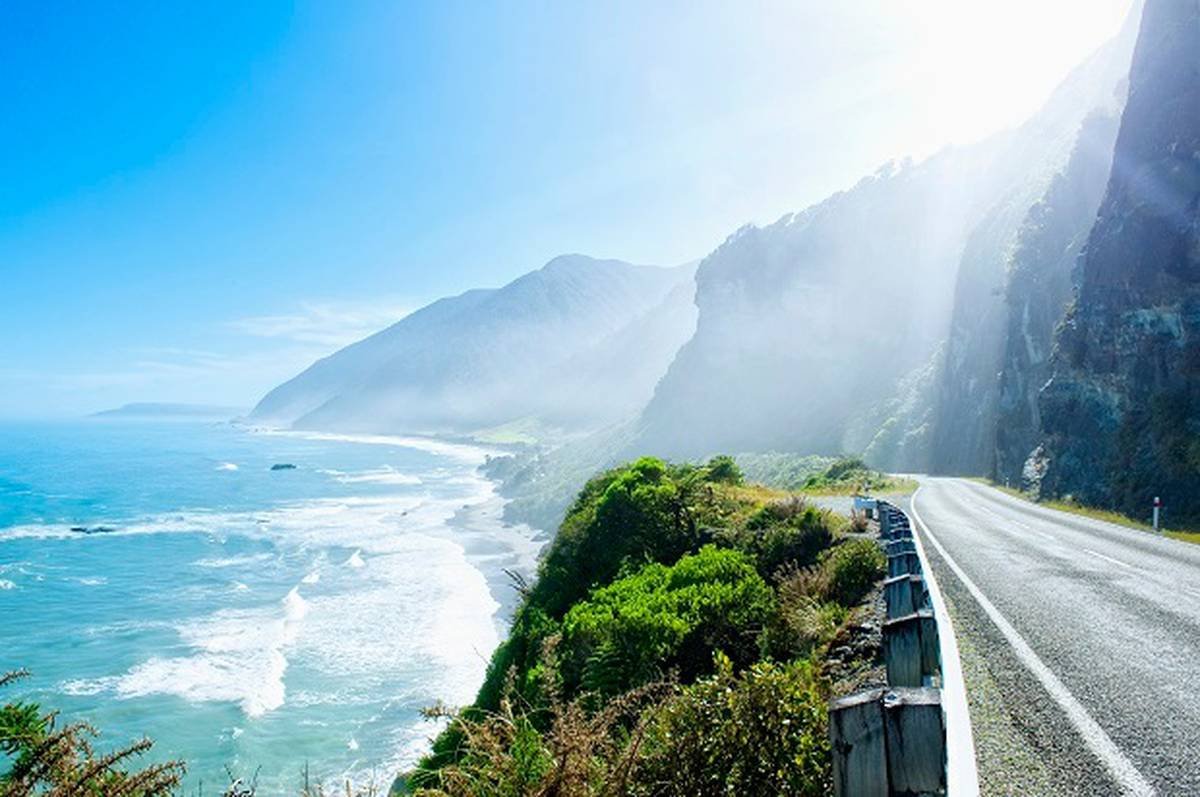 The West Coast of the Southern Alps

Within this 600 kilometre long swathe of Eden, no wider than 70 kilometres at any point, the mountains look closer, the lakes clearer, the rivers larger and faster, the forests more lush than anywhere else in the country. Not surprisingly, given its rich environmental heritage, the West Coast of the Southern Alps boasts five of New Zealand’s fourteen national parks – Kahurangi, Paparoa, Arthur’s Pass, Westland, Mt Aspiring – along with the South West New Zealand World Heritage Area.

Days can be spent exploring the region, which Rudyard Kipling described as “the last, loneliest, loveliest, exquisite apart”. Among the scenic treasures to be found on the West Coast are New Zealand’s highest mountains, lowest glaciers, finest lowland rainforests (with the tallest trees), wildest beaches, longest caves and most natural rivers.

The West Coast of the Southern Alps has it all – it is one area of New Zealand that you must not miss. In this increasingly developed world the West Coast remains “with the world’s other special places”.

Wildlife in its Natural State
Nature lovers will discover that fascinating wildlife is accessible in abundance on the West Coast of the Southern Alps, with opportunities to view fur seal colonies, kiwi, the white heron (kotuku), penguins, dolphins and a great varieity of other fauna in their natural habitats. The region displays a great variety of ‘mountains to the sea’ eco-systems; unique alpine flora, vast podocarp forests, temperate coastal forests featuring flowering rata, kowhai and nikau palms, diverse wetlands and much more. Many parts of the region serve as time capsules to show us what our country looked like before humans arrived 1000 years ago.

It is highly likely that glorious image of New Zealand you see in a book, calendar, magazine or poster is the South Island’s West Coast. New Zealanders simply refer to this narrow strip of land as the ‘Coast’: a rugged and primeval region that plunges westward from the Southern Alps – a chain of cloud-piercing mountains – through luxurious rain forest to a breathtaking coast.

The region is also becoming increasingly famous for its world class artists and craftspeople. The dramatic landscapes attract a growing number of national and international artists, who value a lifestyle that is increasingly hard to find in more populated regions. Many artists make extensive use of the great variety of local materials (driftwoods, rare minerals, natural fibres, and more), and have evolved distinctive styles inspired by the region’s impressive natural environment.

For travellers who are just passing through, local arts are showcased in a great many galleries, museums, craft shops and cafés. Those with more time to explore will discover dozens of artists and craftspeople tucked away in hidden valleys and small towns all over the region.

New Zealand’s Pioneer heartland
The West Coast has always been New Zealand’s pioneer frontier, its cultural ‘heartland’, and like other such places around the world, it has generated its fair share of legends and stories. The region is populated by only 31,000 people, known by New Zealanders as ‘Coasters’, a term synonymous with friendliness and hospitality. Isolated from the rest of New Zealand by the Southern Alps, Coasters have developed a distinctive culture of their own, where the pioneering values of self-reliance and hospitality are as strong today as they were 100 years ago.

The human history of the West Coast is particularly rich. First came the Maori seeking sacred pounamu (nephrite jade, or greenstone) at its sole sources in New Zealand. Gold fever in the 1860s brought Europeans, many of whom stayed on to start farming, forestry and fishing – and tourism businesses.

Today you’ll find museums and historic buildings, fine food and cuisine, a range of accommodation and first-class local guides who add to your enjoyment of the West Coast’s hundreds of natural, historic and adventure experiences.

A Land For All Seasons
During Winter months the warmer current of the Tasman Sea makes the West Coast’s temperatures relatively mild compared to other parts of the South Island. Winter weather on the West Coast is generally very settled, with crisp mornings, blue skies, and snow on the mountain tops giving the region a wonderful fresh feel. Outside the summer months there are fewer visitors, which makes this an ideal holiday time for visitors who want to really connect with the local culture and explore the region in depth.

History and Wildlife
The West Coast of the Southern Alps is a region rich in history. Human development dates back at least 800 years when Maori tribes are thought to have arrived in search of Pounamu (greenstone/ jade). In the 1860s, gold rush fever brought the first Europeans and many new settlements sprang up, some of which are historic sites, some of which evolved into present day towns. The West Coast also has a history of coal mining, plus there is a fascinating range of wildlife that can be viewed.