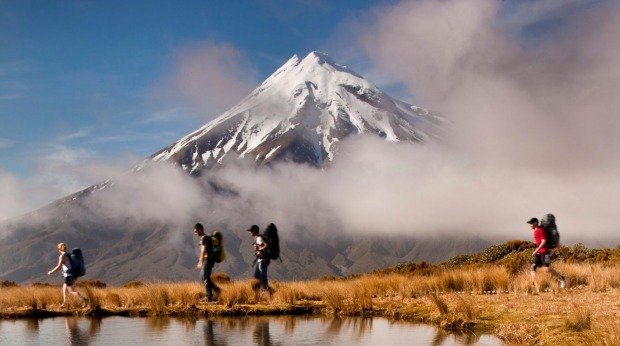 Taranaki is a special place where you can take time out to reconnect with friends, family and loved ones, or enjoy the great outdoors with mountain to sea experiences and everything in between. And the friendly Taranaki people will show you a real welcome.

Take the time to explore all the information available on Taranaki, then get yourself here to experience the real thing.

The Land
The casual visitor to Taranaki may be forgiven for thinking that there is only one volcano here. Strictly speaking, that’s true. Historically, Taranaki has four volcanoes. Mt Taranaki is just the current flavour of the millennia. The Pouakai Range (1400-metres) reached about 2000-metres 250-millennia ago before erosion began its slow process. While the Kaitake Range reached about the same height as Mt Taranaki (2518-metres), 500,000 years of erosion has reduced it to 684-metres.

The Sugar Loaves, off the coast of New Plymouth, are the eroded stumps of a 2000-millennia old volcano crater. With deep canyons, numerous lava-rock caves, and the convergence of warm northern currents and cold southern currents attracting diverse marine life, the Sugar Loaves are also a marine park.

The vast mudflows, or lahars, from Pouakai, some leaving deposits nine-kilometres thick, were superceded by those of Mt Taranaki. Maori used some of the mound-like lahars as little fortresses. These remarkable land formations are best seen on the western ring plain.

Highlights of Taranaki’s 300-kilometre coastline are the many 25-metre tall pinnacles long since separated from the 100-metre distant cliffs. Standing like silent sentinels, they are oblivious but will ultimately succumb to the eroding sea. These spectacles are best seen on the White Cliffs walkway between Pukearuhe and Tongaporutu. Look for White Cliff Walkway signs. If you’ve only got 30-minutes, visit the outstanding Three Sisters at Tongaporutu.

The best months to visit Taranaki are January – March. Most days during this time are pleasantly warm-hot. The major city of New Plymouth ranks consistently as one of New Zealand’s sunniest spots. For this reason, Spring and Autumn can also be a beautiful time for travelling through this region, exploring the art galleries and funky cafes that are found right around Mt Taranaki.

SUMMER – Dec-Feb
The warm weather starts as early as September, though summer does not officially begin until 1 Dec. This is the time to explore the many beaches and rivers of the region, or venture onto Mt Taranaki for dips in crystal clear pools and stunning views of the central North Island volcanoes. Temperatures generally reach the low to mid-twenties.

AUTUMN – March-May
Taranaki is riddled with walkways – through the lush green pastures of our prime dairy country, the spectacular flora of Mt Taranaki or along the solitary Taranaki coastline. Or take a drive along the Forgotten World Highway to Mt Damper Falls – the highest waterfall in the North Island. Enjoy a cuppa at Kaieto Café, which affords spectacular views of the rugged hill country, or join in a game of pool with the locals at the fabled Whangamomona Hotel. Air temperatures are still generally mild (around 18 degrees) at this time of year.

WINTER – June-August
Snow covers the magnificent Mt Taranaki and the clean, crisp air makes it a joy to view. Take a day to drive right around the mountain and admire it from every angle. As you drive you can explore Taranaki’s rich cultural history at various historic pa sites and private museums then reward yourself with a steaming cappuccino in front of a roaring fire. There are also Round the Mountain Art trails and Antique trails to follow.

SPRING – September-November
Taranaki gardens are at their best during the Taranaki Rhododendron Festival from October – November. The rich volcanic soils and high sunshine hours make for colourful, textured plants in a wide variety.

New Plymouth District
Over 70,000 people, or 65-percent of Taranaki, live in the New Plymouth District. It dissects the Egmont National Park and includes the towns Oakura, Waitara, Inglewood and Urenui. Maori favoured this stretch of coast and today they make up about 13-percent of the district’s population.

South Taranaki District
South Taranaki is Taranaki’s largest district. Its coastline reaches from Okato to the Waitotara River in the south and includes a number of towns: Opunake, Manaia, Eltham, Waverly, Patea and the largest – Hawera. The 105-kilometre long coast-hugging State Highway 45, from New Plymouth to Hawera, is mainly in South Taranaki and is known as Surf Highway 45 for good reason – it gives New Zealand’s most consistent surf. They don’t hold the national surf champs here for nothing.

Stratford is the junction of State Highways 3 and 43 and is only 14-kilometres from the Egmont National Park. Many (Stratford people) say that the view from Stratford of Mt Taranaki, with its secondary vent Fanthams Peak in profile, is the province’s most beautiful.