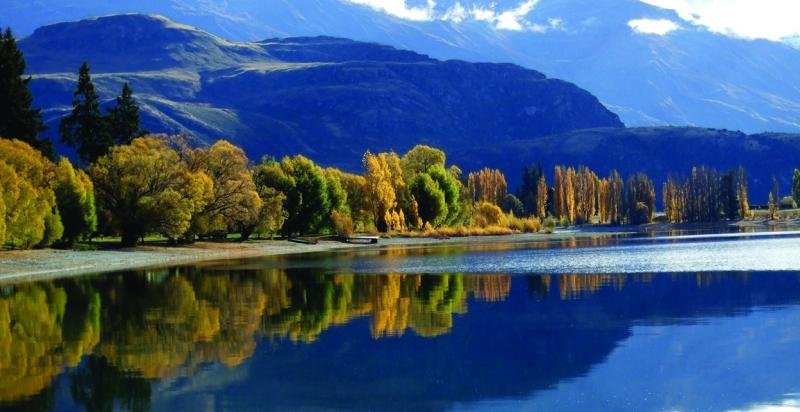 At the heart of the southern lakes

Lake Wanaka located right at the heart of the southern lakes, is the gateway to the Mt. Aspiring National Park, internationally renowned for its glaciers and magnificent tramping and climbing. The mountains surrounding the lake provide a winter snow lovers paradise featuring top ski fields and heliski facilities and the town itself features a pretty shopping village with a wide variety of ambient areas to relax, eat and imbibe.

These areas offer dramatic and diverse landscapes, popular with New Zealand holidaymakers and international visitors alike. The entire region is magnificent – don’t underestimate the time you’ll need to discover it, you won’t be disappointed.

Mount Aspiring National Park – World Heritage Park
This is the third largest park in New Zealand, it stretches from the dense rainforests of Fiordland, across braided river valleys and alpine meadows, to the heavily glaciated Southern Alps and the Lake Wanaka township provides some of the easiest access to the entire park.

Set within the Te Wahipounamu South West New Zealand World Heritage Area, this is one of the most spectacular pristine wilderness areas anywhere in the world. The pinnacle of the park is Mt Aspiring (Tititea is the Maori name), rising elegantly from its flanking glaciers to 3027m, a peak much loved by local and international climbers, and photographers.

You don’t have to be a mountaineer to enjoy the delights of the park (although any one of a dozen world-class local guides can accompany you to the top). Many gentle walking tracks meander through its open valleys or you can fly overhead and gaze down on golden river flats, forested ridges and spilling glaciers.

Treble Cone
Treble Cone is just 35 minutes drive from Wanaka. The largest of the South Islands ski and snowboard areas, Treble Cone offers uncrowded slopes and delivers more runs a day on its high-speed, detachable six seater chairlift. With 5 lifts spread over three large basins, there is enormous terrain variety with trails to suit all levels. Full base lodge facilities include café and bar, childcare, rental centre, accessory shop, ski and snowboard school and medical centre. Treble Cone is an easy day trip from Queenstown and a shuttle service operates from Queenstown and Wanaka daily.

Cardrona Alpine Resort
A high mountain spread over three distinct basins. Cardrona has the best reputation for reliable and quality sonw in the southern lakes. As a wide area serviced entirely by chair lifts, access is easy and queues are rare. Cardrona inspires, instilling confidence, ensuring a great time regardless of your ability.

With three Magic Carpets Cardrona is the place to start. If you want to go hard, go to the Arcadia chutes. Facilities include licensed childcare, 3 restaurants, rental, accommodation, medical centre and ski/board school.
Boarders will be well entertained with 4 halfpipes and new in 2001, a 1km long terrain trail.

Snow Park
This is New Zealand’s first all mountain Freestyle Terrain Park. Without the boundaries and limitations of conventional Mountain terrain parks, Snow Park has the ability to build terrain which will allow freestyle skiers and Snow Boarders the ability to fully express themselves. To complement you while riding 8 Industry standard JBL speakers have been installed to crank out sound all day. 40 lights have been placed around the Half Pipes and the terrain on the West side of the park.

Harris Mountains Heli skiing
From first time heli-skiers to those wanting to ski maximum vertical Harris Mountains Heli-Skiing will take you ‘above and beyond’ to some of the most exclusive and premium heli-ski terrain in Wanaka, Queenstown or Mount Cook.

Summer: January, February, March.
Hot days but be prepared for cooler evenings than you might expect.
Daytime temperatures 21 -34 degrees celsius.

Autumn/Fall: April, May,June.
Warm at the beginning, cooling down by May.
Daytime temperatures 12 – 25 degrees celsius.

Spring: October, November, December.
Cooler days at the beginning, warming up towards the end. Still some snowfalls on the mountain tops.
Daytime temperatures 11 -17 degrees celsius.