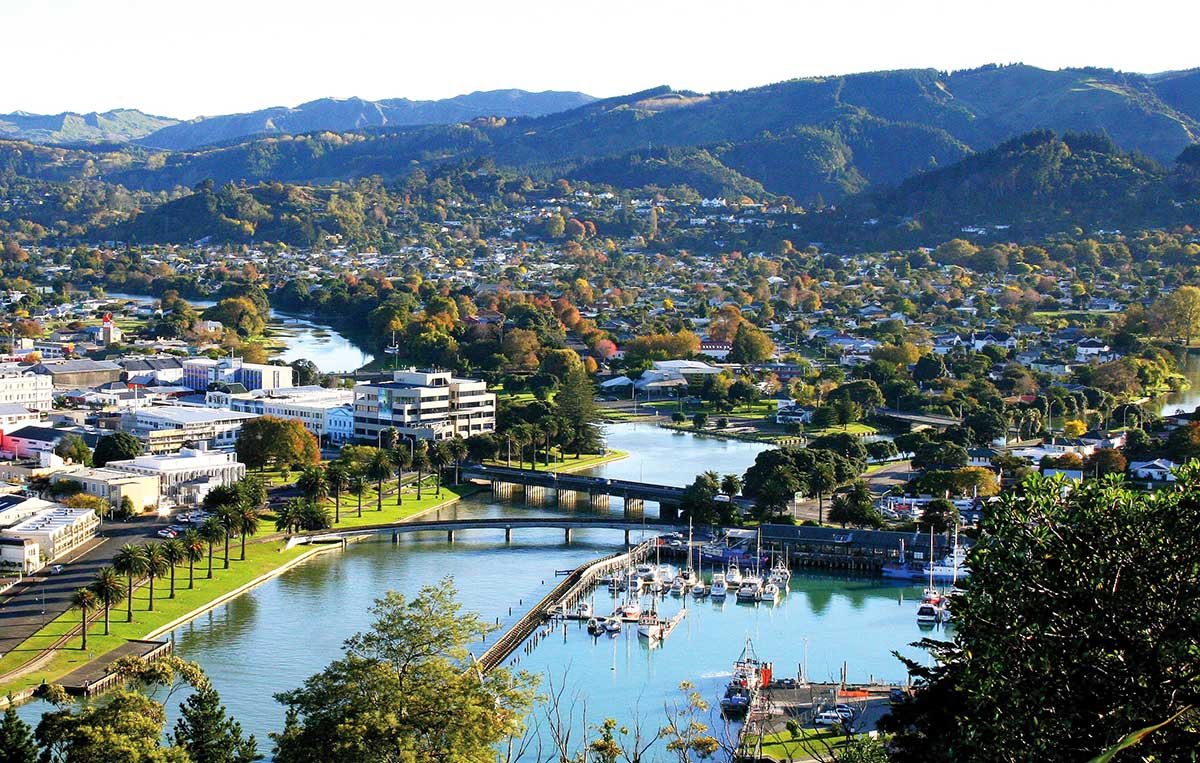 First to see the light

Gisborne, the first city in the world to see the sun each day, is located on the sunny East Coast of the North Island.

The Maori name for the district is Tairawhiti which means “The coast upon which the sun shines across the water”. Kaiti Beach, near the city, was where the Maori immigrational waka, Horouta, landed; and is also the first European landing place in New Zealand.

Captain Cook first set foot here in 1769. European settlement was established in 1831 and the town which developed was named after Hon. William Gisborne, the Colonial Secretary, in 1870. Prior to this the settlement was known as Turanga but confusion with Tauranga, Bay of Plenty, led to the name change. To the early Maori the Poverty Bay area was known as Turanganui-a-Kiwa, “The stopping place of Kiwa”. Gisborne became a borough in 1877 and a city in 1955.

Climate
The Gisborne district (population 45,000 with about 30,000 residing in the city) generally has warm summers and mild winters. Gisborne is one of the sunniest places in New Zealand with average yearly sunshine of around 2200 hours. The region’s annual rainfall varies from about 1000mm near the coast to over 2500mm in the higher inland country. Temperatures of 38°C have been recorded and an average 65 days a year have a maximum of over 24°C.

Farming
The Poverty Bay plains contain 20,200 ha of rich, alluvial river flats which, combined with mild temperatures, make this district an ideal area for the growing of maize, grapes, kiwifruit, citrus and subtropical fruits. The district is mainly hill-country, well-suited to grazing. Sheep, cattle, deer and goats are farmed. Pinus radiata forests have been planted throughout the region with forestry now a major land use.

Opotiki
Opotiki, in the Bay of Plenty, is located at the confluence of the Waioeka and Otara Rivers. The name Opotiki originated from the name of a spring, O-Potiki-Mai-Tawhiti, situated on the eastern bluff above Waiotahi Beach.
The extensive Bay of Plenty coastline provides large stretches of safe, sandy beaches alternated by rocky points ideal for swimming, fishing, boating, or scuba diving. There are also numerous rivers for fishing, rafting, kayaking and jet-boating.

The town (population 5000) marks the “fork in road” where SH2 continues for 147km via the magnificent native bush-lined Waioeka Gorge and over a saddle in the ranges to Gisborne; or branches into SH35, part of the Pacific Coast Highway, which winds its way for 334km around the spectacular East Cape to the same destination.

Climate
The district enjoys a pleasant climate with sunshine hours ranking high on the national table. High hills to the south of the district give protection from cold, southerly winds.

About Wairoa
Wairoa, 118km northeast of Napier and 99km south of Gisborne is a pretty town situated on the banks of the broad Wairoa River, and is the southern gateway to Eastland. The Maori name means “Long water”. It is the gateway to the wilderness playgrounds of Te Urewera National Park and Lake Waikaremoana. Activities to be enjoyed include lake kayaking, trout fishing, boating, day walks and a multi-day walking trip around magnificent Lake Waikaremoana, one of New Zealand’s 10 Great Walks.

North from Wairoa is Mahia Peninsula, a beach-fringed promontory jutting into the Pacific providing a mecca for fishermen, surfers, divers and those looking for the quintessential beach holiday. Inland from Mahia on the highway between Gisborne and Wairoa are the Morere Hot Springs set in a nikau-predominant native bush reserve with superb walking tracks.
Wairoa provides an excellent, sheltered venue for waterskiing, yachting and rowing and features a relocated lighthouse set on the banks of the river.

Climate
Warm summers and mild winters are a feature of the climate in this district. Winter snowfalls in the higher Urewera country are not uncommon. Summer temperatures rank with the best in New Zealand.

Farming
A large freezing works is based in Wairoa to cater for the high sheep and cattle numbers raised in the district. Deer and goats are also farmed. Extensive pinus radiata plantings in the surrounding hill country. Maize and sweetcorn are widely grown on the district’s fertile flats with some areas of sub-tropical fruits and vineyards.